The Life and Music of Hank Williams, Sr.

The Narrator weaves Williams’ life events with the songs they inspired and covers the brief life of Hank Williams, Sr. from his teen years through his failed marriage, his triumph at The Grand Ol' Opry, and his decline into drug and alcohol dependence. Hank is joined on stage by a classic country quartet including steel and electric guitars, acoustic bass, and fiddle. The musical arrangements faithfully recall the recordings heard on radio in the 1950s. While the story elements are 'heavy' and prophetic, the show is very family friendly. Our audiences over the past five years tell us they are both moved and more aware of the forces which drove this influential and tragic performer.

The website lovesickbluestribute.com contains pictures, audio samples, and additional information from the show.

The audience is present during Buddy's band rehearsal as he prepares for the infamous mid-western tour known as "The Winter Dance Party tour" of 1959.

The stage vibe is intimate as Buddy's dialogue is totally directed at the audience; the tone is conversational and responsive to questions raised during the pre-show warm-up.

Although he has had eighteen months of nation-wide recording exposure and fame,  Buddy wants to expand his inspirational efforts to include big band arrangements and movie sound tracks. . Buddy's musical combo, The Crickets, opted to stay in Texas; therefore Buddy needs to rehearse his touring band.

That is the show's premise which provides context for an evening of Holly favorites and those of the Everly Brothers and Little Richard.. ....these contemporary artists were friends of Buddy and he pays tribute to these influences in the show.

This unique format for a stage play is certain to give an inside look at a life which has been described as “eighteen months of fame and generations of influence”. 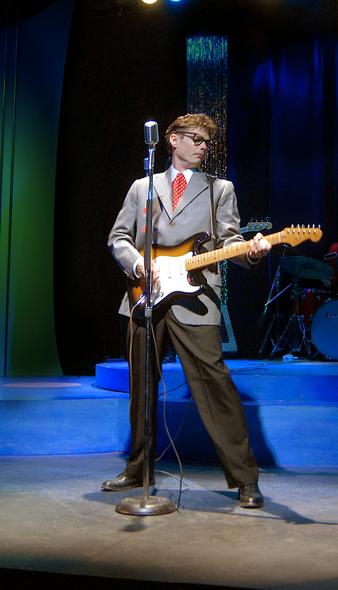 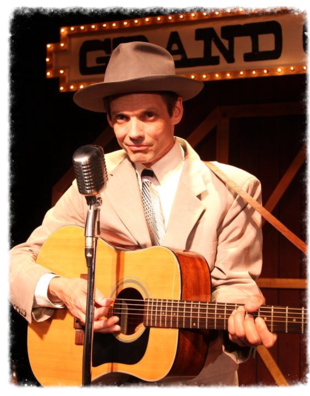 Re-live the days of the Grand Ole Opry as Tracy Wygal enters the decorated stage, in character as Patsy Cline along with an amazing live band, delivering mega hits like "Walkin' Afer Midnight, Crazy, She's Got You and many many more.

Good luck hearing Robbie sing this one over the crowds singing!

​Ending with a rousing "I Saw the Light" joined by Patsy, This show leaves every audience member singing as they leave the theatre and wanting more.

Robbie’s ability to copy the tonal qualities and phrasings of other vocalists led to his award winning and acclaimed performances, in theaters from Virginia to Missouri to Pennsylvania (breaking attendance records), as the lead in the nationally syndicated shows: 'Hank Williams: Lost Highway' and 'Buddy – The Buddy Holly Story'. As well as the Robbie Limon original productions: 'An Evening With Buddy Holly', and 'Lovesick Blues: The Life and Music of Hank Williams, Sr.'

* News and Reviews are HERE *

Want Robbie as Hank Williams or Buddy Holly in either the nationally syndicated or exclusive original theatrical performances? Click "Contact" above!

​The 2005 Chiquita Award was given by M. Lawrence of The American Theater Critics Association for Robbie’s portrayal of Country Music’s first superstar.

Theatrical and Director references are available by request 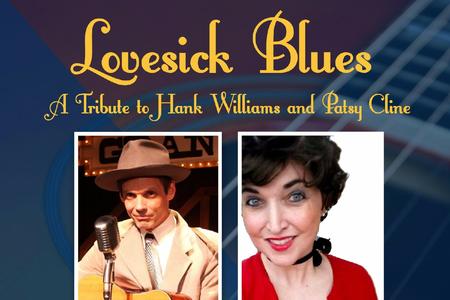